Today, here in this blog post we are going to take a look at Android Platform and know about how long has it sustained in the market? 5th November; eight years ago that means in 2007; was the day when Android was born. 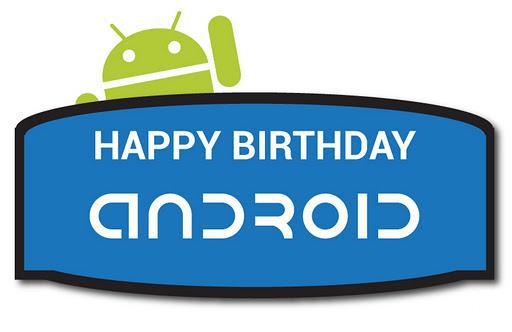 Android is now eight years old. 5th November 2007 is the birth of the platform. Android was formally announced along with its union with Google, HTC, Samsung, LG, Sony, Motorola and lots of such software companies, chip manufacturers as well as mobile carriers.

In the initial stages, it was presented as the open source alternative to various mobile operating systems like Microsoft’s Windows Mobile, RIM’s blackberry, Nokia’s Symbian and the most well known iPhone.

Within these eight years, the mobile market has changed rapidly and Android has now dominated the market as it is now the single most used operating system on the planet and runs on billions of phones as well as devices like as tablet, smart watches, set top box, Smart TVs, in car entertainment systems and lots more.

The entire mobile world is dominated by Android now days. Yes, Apple’s iOs is available but it has very less share. Android has now released its full sixth version which can also be said as its thirteenth notable revision.

Still there are plenty of improvements in the platform to be made and manufacturers’, developers are in constant efforts to improve it and we have seen the progress in last eight years.

Android development began in September 2003 and later it was owned by Google in 2005. The SDK or we can say Software Development Kit for Android was released on November 12, 2007. As the beta versions were released on 5th November, it is celebrate as “Android Birthday” every year all over the world.

Let’s take a look at the entire eight years journey of Android:

Android came in the market with the Android beta release in November 2007. Android one is the first commercial version that was released in September 2008.

And from then onwards, Android is continually being developed by Google as well as Open Handset Alliance with number of updates to the base operating system after the initial release. Recently Android’s major update Android 6.0 “Marshmallow” was released in October 2015.

If we closely take a look at Android’s versions then they are named with a confectionery themed code name and are released in alphabetical order with the first version being Android 1.5 Cupcake and following ones as follows:

Different Android Versions and their features:

Till today Android has covered these many stages and is still marching ahead on the path of progress. We wish Android a very happy new year that aids in its progress and boosts its revenue.

Hope this blog post will be useful for those who wish to know in depth about all of the Android versions and also those who are willing to purchase mobile devices with latest android version.

Before you purchase any device, take a look at the version features and then if they meet your needs you can buy one. For more such updates about Android, Stay connected with Softqube Technologies, Android App development Company India.