What Challenges are Faced by Developers During Android App Development Process?

Technology is being used in various ways by human beings in every field. Several wireless technologies are useful in getting connected with each other. With the increased use of smartphones, the usage of internet on mobile devices has increased.

Now, one device can be used for many tasks. These smart phones come with preloaded mobile apps and these apps perform all the necessary actions which can be done using laptop and desktop. For example: Various document apps are available with allow users to do all the similar tasks such writing in word, calculating in excel as well as preparing presentation in PowerPoint.

Basic mobile applications include Gmail, calendar, clock, weather information and more. Huge demand in the usage of mobile apps directed developers to develop these apps and so now we can see many app developers around us involved into development of such mobile apps.

Developing mobile applications can be sometimes very difficult task. Here, we have considered developing an educational app that must be user oriented where one can log in and begin the test after selecting the subject. Every question has the time frame of one minute.

Such apps are to be developed using latest android platforms and the language used is Java or HTML. For backend system, SQTLite is used. For android environment, it is mandatory to have java on your system.

Here, one can use JDK SE development kit 7. Code is written with the help of an editor like as Eclipse. Once this editor is used then the need arises to connect Android development kit with the editor and it is done with ADT plugins.

One can make use of Plugin developer tools available for developers. Developers can create different app modules such as:

It sometimes is a hard process to develop apps for multiple devices as different properties are to be set for different devices. Every android device has different version and hence while developing apps, version details are to be checked. 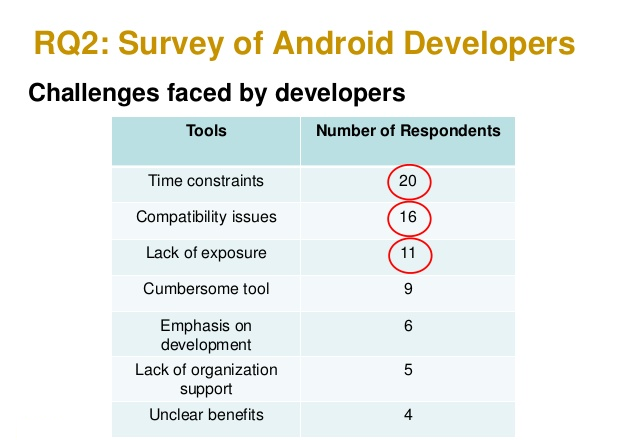 Further, the android application is also tested on various android platforms. Support for HTML5 must also be checked. Also, there’s a need to check emulators issue; which offer hardware environment for android apps.

The app size also is one of the biggest challenges faced by developers while creating android apps as it is very difficult to store huge data within less size. Also, the apps must be secured as android malware can attack it.

So, if you are an android app developer and wish to become an expert in this field then do read this blog post as here we have highlighted all the possible challenges that are faced by developers during the development phase.

Would you like to get more such tips about android development then stay connected with Softqube technologies, Android app development company in India.