You will Soon Attend a Coding Boot Camp at Your College

Coding boot camps began as an alternative to traditional college education. These have now reached all over the world. Coding boot camps are now trending topic in higher education as their main focus is on job readiness and lucrative starting salaries.

This has gained the attention of college students as well as career switchers. Colleges are noticing the success of coding boot camps and now they seem to boost their ability to get students skilled on technical subjects.

These have become the fast track options for those who wish to become expert web developers. These camps actually came into existence to fill the increasing demand for skilled PHP web developers.

Such coding camps help to address the on growing demand of boot camps. Studies show that Coding Boot Camp market grew by 2.5 times to an estimated 16 056 graduates and it was estimated to reach on an average 48,700 computer science graduates in 2014. 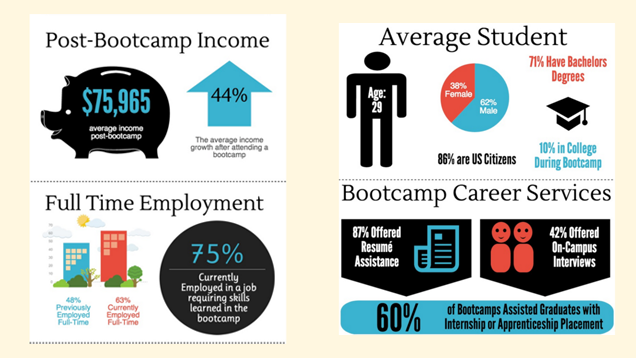 Slowly, universities begin to value these camps and they started cooperating by teaching technical skills as demanded by economy, education will change in many ways in 2016.

What Colleges are doing about Boot Camps Now?

The above three approaches show that coding boot camps are now considered seriously and it is really interesting to see how each college approaches technical, skills based education which has made boot camps successful.

Hope this blog post will be useful for students who wish to be a successful web developer. Stay tuned to us for more such informative posts. To know about the tasks of a web developer, you can get in touch with experts at Softqube Technologies; a well known PHP Development Company.