Do you Find Google as the Default Search Engine in your iPhone? Here’s the Reason

In 2014, Google paid handsome amount of $1 billion to Apple to have it search bar as the default iOs search engine. This was done as a part of social revenue sharing deal. The details are available in the transcript of the ongoing legal battle between Oracle and Google.

Google had an agreement with Apple stating that whatever amount of revenue it generates through Apple Device; some percentage will be given to Apple. There’s lot of inspection about the confidential agreement between Google and Apple.

However, this has been never revealed by Google and Apple. Still today, there contract terms are unclear and all the details from court proceedings are yet pending. This shows that Google genuinely offers certain percentage of revenue that is generated via searches made on iOs devices. 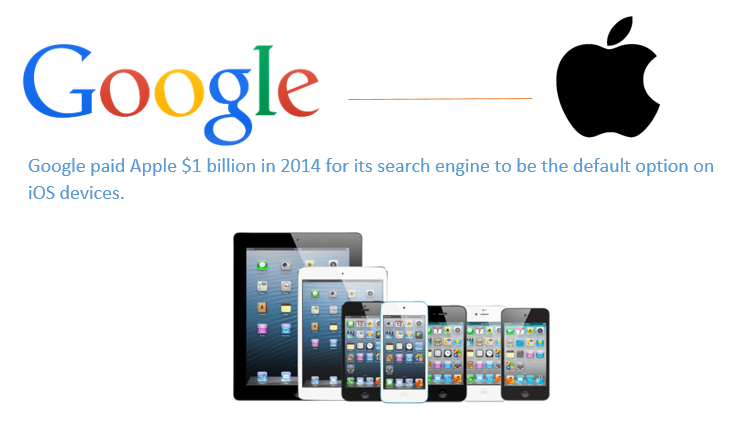 The data is to be processed and mined from iPhone users. The attorney says that an anonymous Google witness said that at one point of time, the revenue share was 34% as mentioned in the court transcript.

Another request was then filed by Google for the transcript to be sealed and redacted and hence Apple then requested the same via separate request. Later on; Apple’s CEO criticized the Google’s business model which is entirely based on advertising.

This separated Apple from those companies that monetize personal data. One might like the free services however according to Apple; it’s not worthy to have email, search history and even the family photos in the data that is mined and sold off for advertising purpose.

Oracle at present is entrapped in copyright infringement lawsuit with Google. This has been continued since 2010. It says that Google used Java Software without paying it for developing Android.

Google has generated revenue of about $31 billion and profit of $22 billion via its Android operating system. Oracle is getting royalties from Google over its use of Java language and on the other hand, Google says that it must use Java without paying any fee.

Does this really matter?

Yes, if you are using iPhone then this will be definitely the question for you. However, we can say that Apple allows its users to change the browser from Google to Safari but Google is still its default.

This dispute is actually raised by Oracle and hence this information came to limelight. Oracle says that its rights are infringed by Google. Further; as we mentioned earlier Google and Android shared some amount from the revenue.

Further, Google makes handsome revenue from Android in the form of certain percentage from apps sale as well as media on Google Play store. It also earns from Display Advertising.

Well, this debate will go on between the three giants. Anyways we can say that all three are dependent on one another for the sake of money. However, the aim behind this blog post was to make aware our readers about the disputes going on in the online industry.

This leaves a message for all of us: No matter how successful you become there are circumstances that won’t allow you to be at peace. So, never exceed in getting anything that takes away your peace.
Stay connected with us for more such industry related news and updates.