Synopsis – To find an appropriate database that matches your application becomes arduous amidst the gamut of offerings available in the market. You need some general awareness of the basic criteria with a few use cases that can guide and help you develop and create scalable and robust mobile applications. This blog sheds the light on the same.

In either of the two situations of creating a new mobile application or adding more features to your existing app, finding a suitable database becomes quite exhaustive. Possibly, when you find your present database becomes insufficient to manage millions of users and frequent updates, it’s time to choose the right database.

There are several instances where a database dramatically begins to compromise the quality and performance of an application.

In the face of disruption, Uber had to migrate their database from PostgreSQL to MySQL. Uber took this decision as they confronted the inefficient database replication features and a constant migration happening from one PostgreSQL version to another.

Let us go ahead to understand the below sections of the blog one after other.

Some of most popular database to build Android apps and iPhone apps are as below. Based on your requirements, you can choose the best database for your mobile.

An open source, multi-threaded, and easy to use SQL database.

A powerful, open source object-based, relational-database that is highly customizable.

An open source, low maintenance, key/value store that is used for data caching in mobile applications.

A schemaless, JSON document database which is known for its flexibility and scalability.

A distributed cache system which is multi-threaded, and used primarily for caching objects to speed up applications by alleviating database load.

A popular open source relational database which was created by the original developers of MySQL.

A free and open source, NoSQL database which is designed to handle a large amount of unstructured data at any scale.

SAP HANA is a column-oriented, in-memory relational DBMS developed by SAP SE. It is written in C++ and was first released in the year 2010.

Another venture by Apache Software Foundation under the domain of Apache Hadoop, is a distributed database written in Java.

FileMaker is a cross-platform database application developed by Claris International.

IBM Db2 is a family of data management products developed by IBM. Initially, it was released in the year 1983 and is available for Linux, Unix-like, and Windows Operating systems.

Solr is an open-source search platform written in Java. It was released in 2004.

It is a NoSQL database offered by Amazon as a part of AWS. It was released in the year 2012.

Also known as a Sybase SQL Server, it is a relational model database written in C and C++ language. It was initially released in 1987.

Some of the other databases include Neo4j, Couchbase, ArangoDB, Riak DB, CouchDB, RethinkDB, and Memcached.

What is the structure of your data?

The structure aims to help you know about the ways you need to store and retrieve your data. Mobile applications deal with data in a variety of formats. Offline apps store the entire data on mobile devices. Online apps depend on server access for their stored data to function. Like, Ecommerce apps fall into the online apps category.

Other types of apps are called Synchronized apps. They store all their data on mobile devices. Hence, it can be used offline. However, the stored data may be updated on the server when the device is periodically online.

What is the size of your data?

As simple as the question, the answer is the quantity of the data you need to store and retrieve as critical application data. The quantity may differ based on the data structure combination that is selected and the ability of the database to differentiate data across multiple file systems and servers.

So, choose a database focusing on the overall volume of data that is generated by the application at any specific time and the size of data to be retrieved from the database.

This refers to the time taken for servicing incoming reads and writes to your application. Some databases are created to optimize read-heavy apps. And others are designed to support write-heavy solutions. A great time-saver as it helps to reduce the time that you put in acquiring data from the database. This saved time can be used to improve the efficiency of the android database application.

Like, MongoDB is faster than MySQL when it comes to managing large volumes of the unstructured databases. For structured data, MySQL is much better. 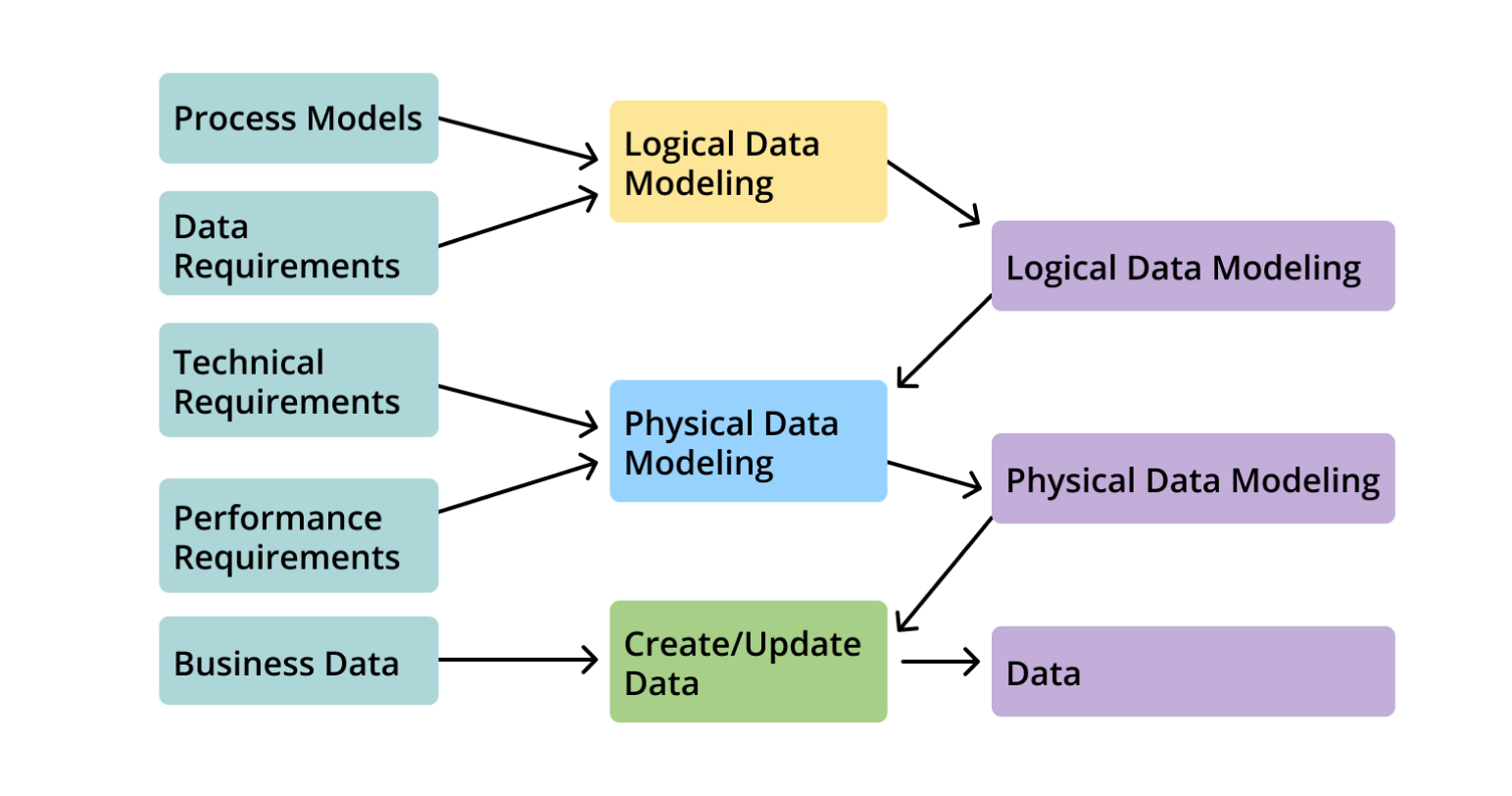 Before choosing any database, you must perform Data Modeling. This modeling becomes a representation of the data structure to be stored in the database. It is a very powerful expression of the business needs.

In case if your app contains features such as search queries, reporting, location-based features, etc, data modeling becomes very helpful. Such apps need multiple databases to manage different types of data. Like for example, Uber uses MySQL, MongoDB, and a lot of other databases.

While using decentralized and synchronized storage it becomes essential to access, store, and transmit data in a secured manner. To ensure complete usage, you must address authentication, data in motion, data at rest, and read/write access.

You need a flexible authentication that can allow using standard, custom, and public authentication providers. For many apps, it becomes important to support to the anonymous access. For data at rest on the server and client, you need support for both file system encryption and data-level encryption. Similarly, for motion data, the communication should be over a channel like SSL or TLS. For data read/write access, the database should offer granular control over what data can be accessed and modified by users.

If you plan to support multiple platforms like iOS and Android along with devices and wearables, you need to plan it now. A gamut of mobile applications evolve adding web companion app or a native desktop app.

Building mobile apps for iOS and Android platforms need React Native Framework. It is quite easy to develop apps for Android and iOS if developers share code on both the platforms. As it supports all the types of databases.

Use Cases To Frame Selection Criteria

There are mobile applications having features that work offline and need internet connection to save the local data in to the app’s server. Data synchronization is a critical part while developing a mobile application. You need to carefully analyze the use cases for your application and find out what is applicable at its best for each of them.

Most of the apps generally change-over time and require modifications and changes in the database structure. Whereas, in a structured database like MySQL, PostgreSQL, etc, you will not be able to make frequent changes.

Unstructurd database like MongoDB brings flexibility to change without taking you through the tiresome process involved in structured databases. It allows you to work with unstructured data in multiple laysers and adds new app features with great flexibility.

Databases like SQL may lose netwerk connection with the client side storage. This will further generate and error medatabasesssage instead of transferring the data needed. In such cases, you need to re-configure your database. Besides, there are several other challenges to be dealt with MySQL and network interruptions, like as below:

To avoid such problems, maintaining a database that offers better reliability and connection resistance is a better option.

The moment you think to scale your mobile application, you need to add more resources in the form of servers and make the database engine highly efficient. The database must be powerful enough to utilize the resources and handle several processes together. In short, you need a multi-threaded database.

Multithreading helps database schedule parallel tasks efficiently and minimizes workload on the server side. Also, distributed design of a database is significantly important for gaining scalability. It can help you split up the services on different threads to minimize the workload on main database.

To push new updates to the mobile app needs lot of changes to the local database. The developers needs to keep up with the old database versions.

For example, some of your app users are using V1.0 version and you recently pushed V3.0. Now V1.0 users update to V3.0. Note that these users have skipped V2.0 altogether.

You can choose SQLite with any server-side database, and it would work fine. SQLite has built-in OpenHelper tool to check database versions and to call functions such as onUpgrade or onCreate.

Mobile applications that modify same data on multiple devices together will confront several conflicts. The database needs to support a mechanism that can resolve the conflicts. The flexibility of the conflict resolutions mechanism is important. It should allow resolution automatically, on the device, in the cloud, by a human and by an external system.

Check out the below specific use cases to determin which database would be more suitable for your specific requirement. 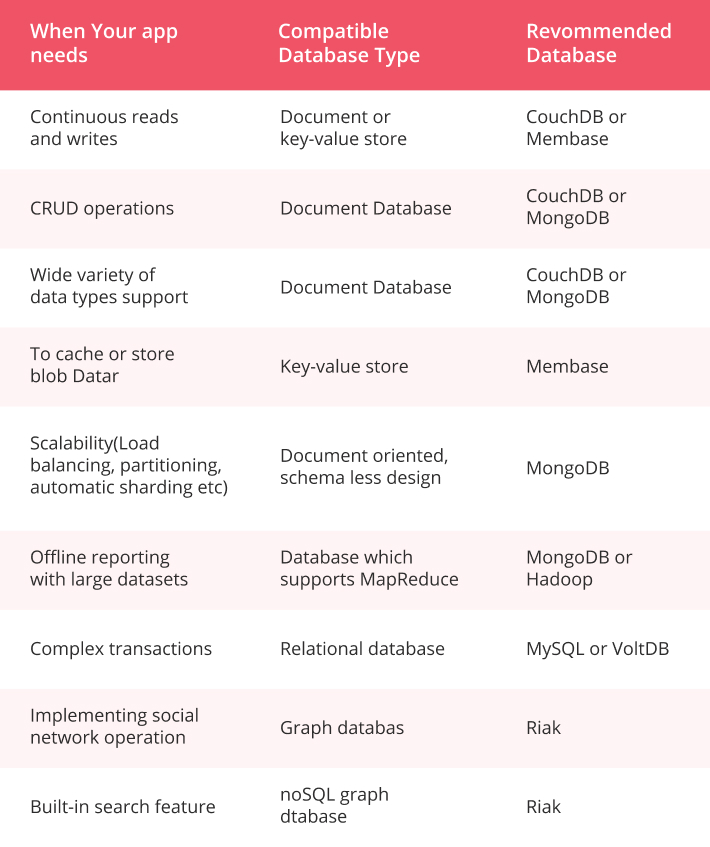 This is applied to improve your mobile app performance. You need to look on various aspects such as how, when and where your users are using your application. You can identify and serve a segment of users with specific information that they always look up to depending on their behavioral traits.

Good news are that, that the data can be made available and cached locally before the users even log-in to your app. MongoDB offers predictive caching that allows developers to serve users with predicted and cached data before they even ask for it.

MVCC support allows simultaneous access without blocking the threads or processes involved. MVCC also allows reader to view a snapshot of the data and helps you read and write operations to continue in parallel.

For example, in the below table, databases have MVCC implementation. 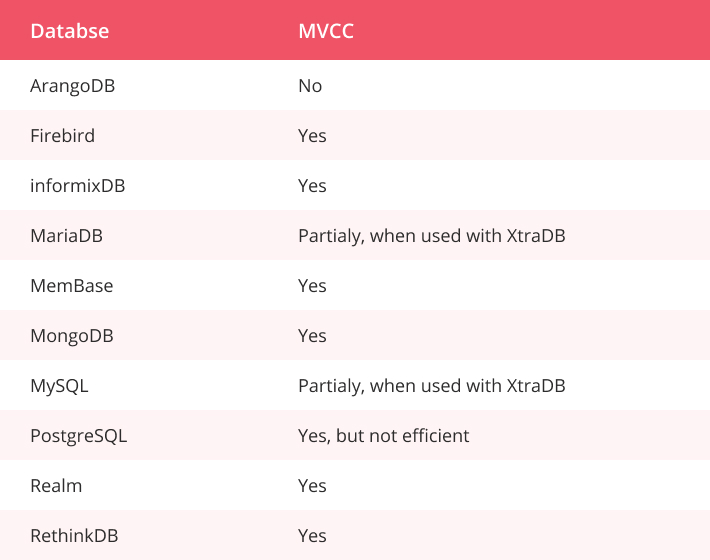 This is inevitable for any real-time applications and online gaming applications. High latency leaves a bad impression to the app users. Anything falling short than 500ms is considered to be in high latency.

Latency optimization is a continuous cycle. Each database comes with its own limitations in terms of replicating and optimizing. We have various methods to reduce latency. Replication is the most popular one. Several companies replicate their prodcution database to separate read/write, static content creation and request queries.

The below are some databases with lower latency than the average:

Caching Databases To Lessen the Load

Quite often we add a caching layer to reduce the load on servers. When we cache data on the chaching layer, we intent to prevent a recurring request for the same data. This reduces the number of requests going to the server and renders server efficiency and performance.

Any changes in the mobile app whether it is feature improvement or new feature update, it will affect the database. These criteria helps you to determine the right databases for your mobile app. The most important part is to find a database that is highly flexible.

With an experience to develop a myriad of enterprise mobile applications for our clients, we look up to the future requirements and comprehensive features to choose the right mobile app database. Get in touch with us if you are facing the scalability issues or in need to build data-heavy applications from the scratch.