Android Developers must not use Silverpush says Federal Trade Commission

When you read this title? Then if you are the one who stays updated with techno news will be easily able to understand however if you are new or read about IT occasionally then you might have several questions in mind like as “What is Silverpush?” How it is used? What it has to do with Android developers and why FTC restricts it usage etc.

Keeping in mind, all these things; we decided to write this blog post that contains answer to each and every question:

Ban on use of SilverPush by FTC:

The United States Federal trade commission warned Android developers for the use of Silverpush for developing android apps. Recently, FTC sent out letters to all developers of 12 mobile apps available on Google Play store.

It is a unique audio beacon technology that adds the feature to mobile applications through which they can listen to the unique codes embedded into television audio signals in order to determine the television shows and advertisements to be played on a nearby television. 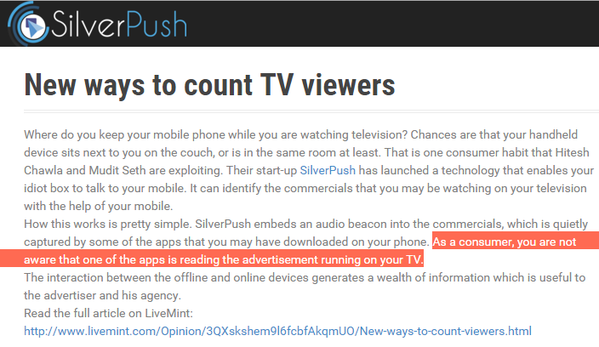 This functionality runs silently in background and with this; the user’s android device can detect the television playing in the background. This further allows information like as TV habits of users to be passed along to third party advertising firms.

The Silverpush code is not yet embedded in any television programming in United States. The Federal trade commission notes that when it finds the apps equipped with the code in order to examine the television viewing habits of consumers within United States; statements or user interface then this can be considered as breach of Federal Trade Commission Act.

What FTC wants to convey?

With this, FTC encourages developers to tell this fact to the consumers that later it will allow them to have an informed decision regarding personal details to disclose once they use the apps. Further, FTC says that its staff will continue to monitor the apps in coming months.

At present, names of app developers are not announced as FTC didn’t reveal them into the letter that it had sent to the developers. Further, it is not known whether the iOS apps are involved in this issue or not as FTC claims to have sent letters only to Android App developers.

Generally, all the apps developed using Silverpush are available on Google Play store itself hence till now it has said nothing about iOS apps.

Developers using Silverpush must now stay alert because from now on you won’t be able to use that. Next time; you start developing an app for android; keep in mind that you must use any substitute for Silverpush if it’s that necessary.

Hope this blog post might have helped you in knowing what exactly FTC wants from android developers. Let us know how this has helped you and what changes you made in development process after reading this post.