PHP is one of the most popular coding languages that is preferred by most of the web developers due to its flexibility as well as ease of understanding. Recently, the new PHP version PHP 7 Beta has released which has greatly improved the performance and provides consistent 64 bit support.

Here, if we talk about language then a null coalescing operator is added along with a proper comparison operator. Further, support for other various types of declarations is also available. If we talk about PHP’s previous version PHP 6.x then maximum votes were for PHP 7 as compared to PHP 6.x because the later one failed completely.

Talking about, PHP 7 release; it is still in the development previews and php.net announcement of beta shows that it is a development preview that is not yet used in production. This means basic changes will no longer be accepted.

Along with this release, 200 or more commits with nearby 25 reported bug fixes as well as security, stability and other such improvements can be made. According to Zend Technologies, that led the PHP 7 next generation project; PHP 7 is going to provide huge performance gains.

These can vary from 25% to 70% on real world apps as well as upgrading PHP without changing a single line of code. This new PHP version also has decreased many of the requirements around two thirds of original ones. 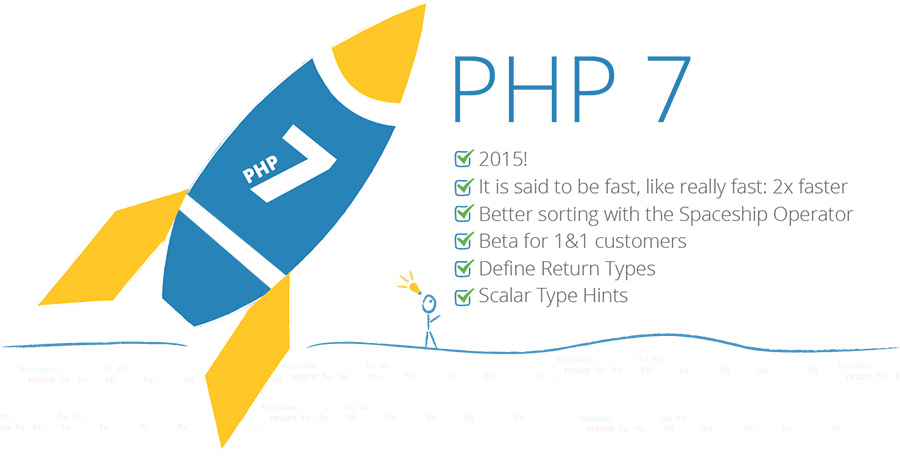 This means you will get three times more as compared to older PHP version 5.6. The new operator has been transformed into Spaceship operator. This can be used for various comparisons especially when dealing with sorting.
This is very similar to strcmp() or version_compare() in behaviour. This can be used on all generic PHP values with same semantics like as <, <=, ==, >=, >.

Also, this offers support for return type as well as scalar type declarations where developers will easily be able to show the kind of return that is expected by any function. This is similar to argument type hints.
So, now one can easily be aware about the strings, floats, ints or bools that are to be passed or returned. The second beta is said to be released on July 23 where as the final release is expected on November 12.

For detailed information about its features as well as its changes, one can read the NEWS file or the upgrading file that includes the entire list of upgraded notes. If you wish to download this beta 1 then it is available at windows.php.net.