Mobile Authentication With Biometric (Fingerprint or Face) In Android

An Introduction of Biometric Authentication

Biometric is the technical term for human body measurements and calculations. It measures human characteristics. Biometrics authentication is used in computer science as a form of access control and authentication. It is also used to identify individuals in groups of people that are under surveillance.

Biometric authentication and identification is unique, they are more dependable in verifying identity than token and knowledge-based methods; but, the collection of biometric identifiers raises privacy related to the ultimate use of this information. 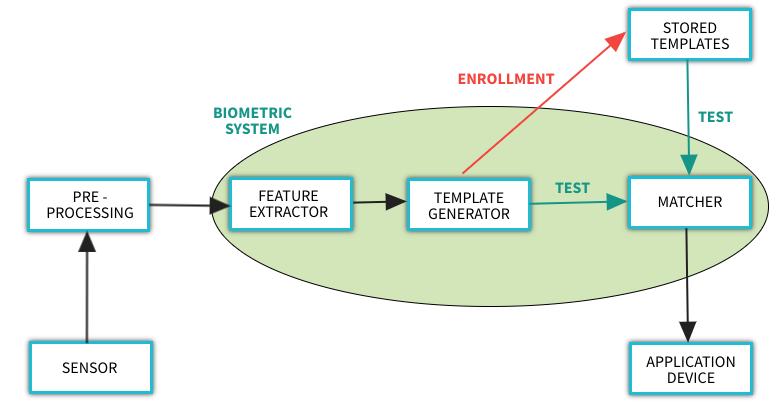 The block diagram illustrates the modes of a biometric system.

In verification or authentication mode the system performs a one-to-one comparison of a captured biometric with a specific template stored in a biometric DB in order to verify the separate is the person they claim to be. Three steps are in the verification of a person. In the first step, reference models for all the users are generated and stored in the model DB.

In the second step, some samples are matched with reference models to generate the genuine and pretender scores and calculate the threshold. The third step is the testing step. This process use a smart card, username or ID number (e.g. PIN) to indicate which template should be used for check. Positive authentication and identification is a regular use of the verification mode, where the aim is to prevent multiple people from using the identity.

The BiometricPrompt API covers all biometric authentication like, face, finger, and iris. 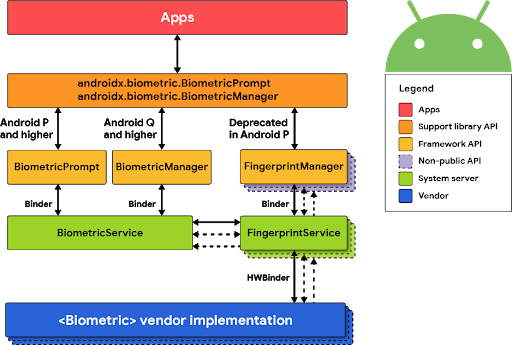 The two new APIs introduced the old FingerprintManager that was used for handling fingerprint biometrics on Android devices. Particularly, the FingerprintManager class was deprecated in API level 28. The flow diagram across android versions can be seen above, the original image can be found in the Android Developer documentation here.

The developer documentation is here: All biometric implementations must meet security specifications as per documentation and have a strong rating in order to participate in the BiometricPrompt class”. For more guidelines, you can see google documentation here and here. 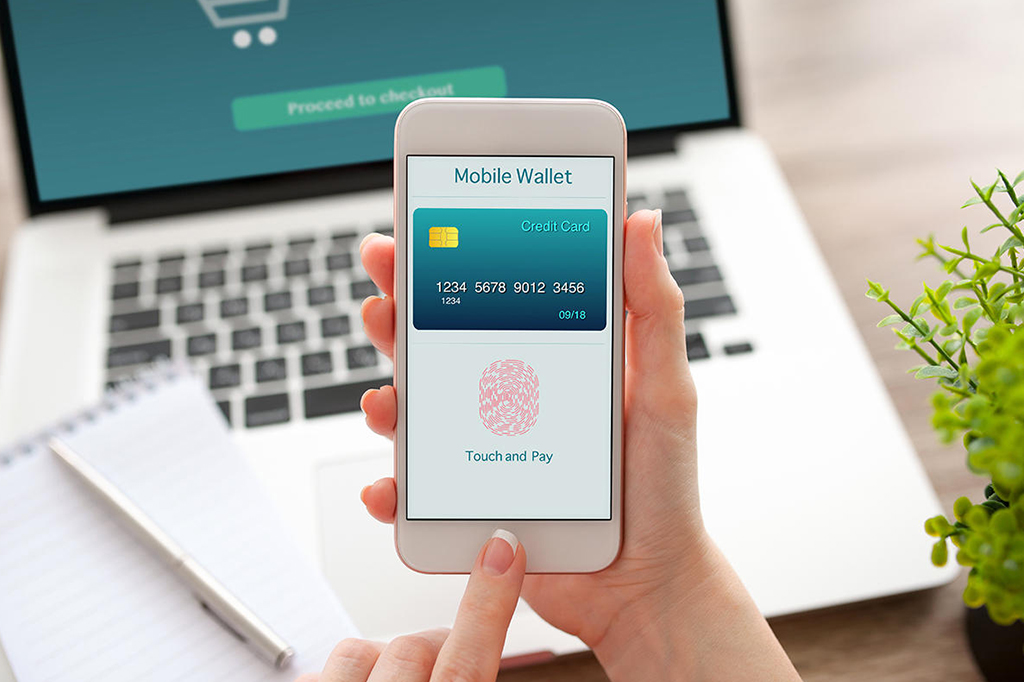 The BiometricPrompt class covers a companion Builder class that can be used to configure and create BiometricPrompt class instances, as well as defining the text that is to seem within the biometric identification and authentication dialog and the customization of the cancel button that appears in the dialog.

Fingerprint is only available on devices which contain a touch sensor and on which the acceptable configuration has been taken to make secure the device and register at least one fingerprint.

Here are the steps to implement BiometricPrompt Compat:

Before we go into details of the code, let’s see the responsibility of BiometricPrompt class from documentation:

A class that manages a system-provided biometric prompt. System will show authentication messages on latest devices android 9 Pie and above. On devices before Android 9 Pie, this will show a dialog prompting for fingerprint authentication. The prompt will continue across orientation changes unless explicitly canceled by the user. For security risk, the prompt will dismiss when the activity is no longer in the foreground.

BiometricPrompt class is not only limited to fingerprint authentication, which is great! 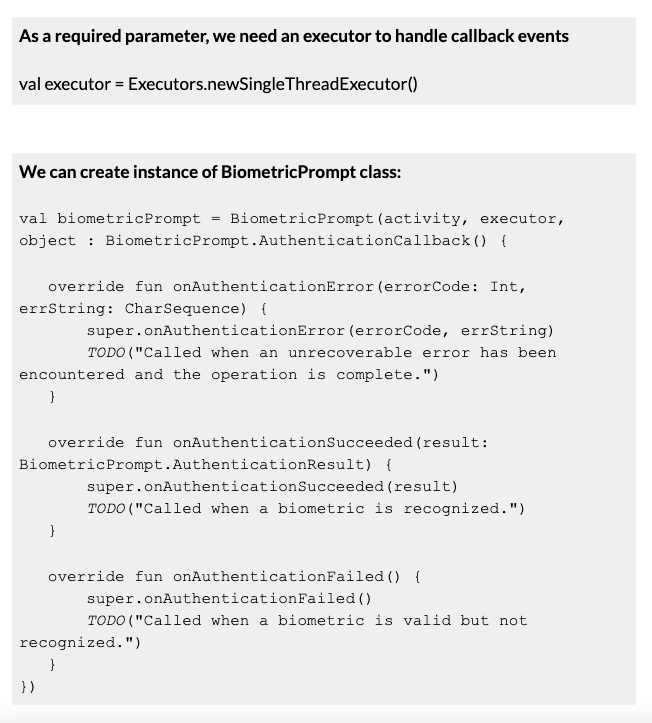 In these parameters subtitle and description are optional, so you can skip those parameters. You might have a question: what’s the purpose of negative button text?

As per the documentation, a “Cancel” button is usually used for negative buttons, but may be also used to show another method for authentication, such as screen that asks for a backup password or other login prompt method like application PIN or Pattern. You can use onAuthenticationError() method of callback as below to handle error code.

If you would like to check in details for more understanding you can find more about error codes from here.

You can cancel the authentication by calling below method :

Above image is how biometric prompt view like on Android 7.0 (left) and Android 9.0 (right) 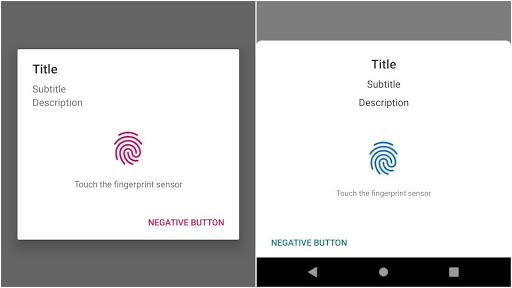 As we have integrated it’s easy, As Google provided the system authentication prompt using a device’s supported biometric and as you can see, it is easy to integrate. 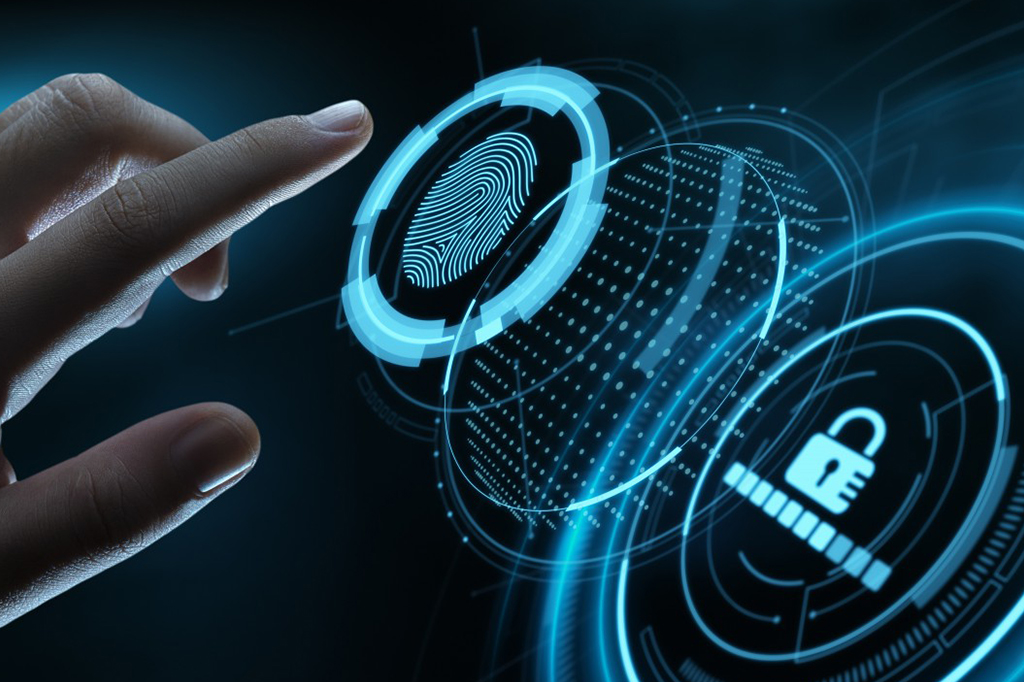 Biometric HAL guidelines are as there to ensure that biometric data is not leaked and is removed when a user is removed from a device:

A strong authentication of mobile strategy should encompass a biometric factor, and it should examine implementing such a factor into a multifactor authentication process.

There are some methods used in modern mobile devices to authenticate users to a locked device.

Mobile authentication should provide the simplicity to use and security for organization; it’s important for the user, and biometric authentication in android devices offers this balance in a single factor. 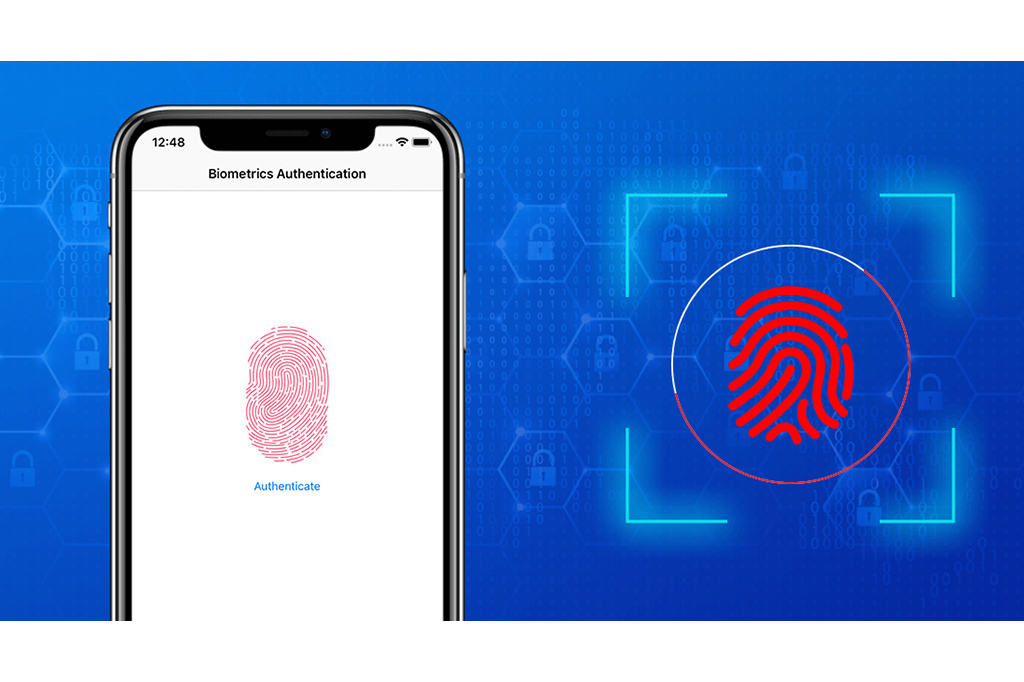 To access their device authentication method is used as a standard password for this user to enter letters, numbers and symbols.this is simple to use until users don’t forget their passcodes. But it does not provide strong protection because users use the same passcode for multiple devices or other logins.

Passcodes are easy for hackers to crack, and they’re capable of shoulder surfing — it might be possible for someone determining the passcode by simply looking over the user’s shoulder.

In Mobile, providing secure authentication is the key. The best secure option is security key in mobile authentication, mobile devices can read small tokens with a Bluetooth or near fields communication scan. The Best thing is that Security keys can log users on to their devices and applications without requiring any passcode or action pattern inputs from the users. Hackers can not reuse and users can not share because Security Key uses public and private credentials. End users require their security keys when they try to access their devices. but Users can lose or temporarily misplace the keys, which leaves open the possibility of a hacker stealing a key and accessing a device freely.

Biometric identification and authentication depends on unique biological attributes, such as a fingerprint, an iris, a face or even a heartbeat. These attributes are much more difficult for hackers and criminals to exploit because they’re unique to each individual.

Today’s biometric identification and authentication systems cover checks to verify that the biometric elements aren’t coming from video or audio recordings as well.

Satish Nada
contact
Are you looking for real talent for your dream projects?
Inquiry
We will respond you in within 24 hours
Do you have a project in mind?
Let's start your project
Quick Contact
We can give you a fast response via email, phone call or skype.
For business inquiries
sales@softqubes.com
Call us on
+91 84600 66686
Let's Skype
softqube.technolgies
services