How Much do Mobile App Developers Earn Per App?

Mobile App Development grows rapidly as people create several applications which they think would bring them fame and fortune. We hear stories of small developers thus transforming them into a cash cow.

There are various apps like as Angry birds, Cross Roads and Fruit Ninja that are successful in the app market. These serve as a motivational factor for developers to continue on mobile app journey. But has any one thought of as to how much money does an app developer make? This blog post will help you to know that.

Earnings of a Mobile App Developer:

A survey was conducted with over 1000 mobile app developers worldwide and most of them were from Asia Pacific region to know about their struggles and motivations. According to a report, it is found that mobile app industry is driving fresh talent with 75% respondents who are making apps for less than three years.

Most of them work alone i.e. 47%. Among the popular category of apps are games and entertainment. Most developers prefer working with Android platform and nearly 42% have 1- 3 apps on Google Play Store while 28% have same amount of apps on iOS and 15% of them have apps on Windows Store. 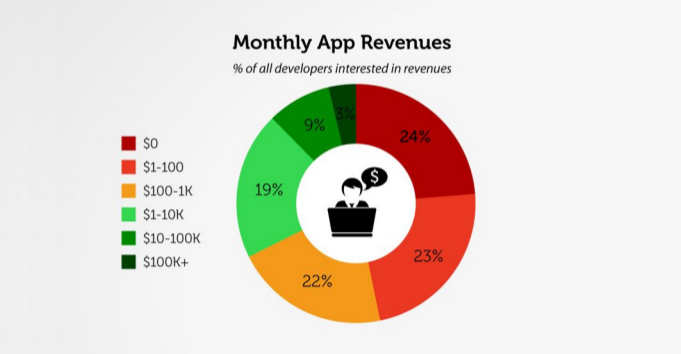 Windows is not as popular as Android and iOs however windows mobile app developers make more money per app as compared to that of Apple store and Google Play. Average mobile revenue is under $6000 with 55% developers making $1000 per month.

Average monthly app revenue ranges from $5000 to $11000 based on the platform. The breakdown of average monthly revenue of app developers for major operating systems is as follows:

This shows that Windows developers earn more than iOS and Android. Today, we can see most of the app developers moving towards iOS and android however this makes it hard for one single app to stand out from the crowd especially for Indies.

It is one of the biggest challenges to market and make money out of the app. Most of the developers are unaware about effective app marketing and when it comes to Windows store, app developers have very less competition.

Reason: Windows has very niche audience and its app store is not as segmented as Android and iOS. Hence, apps here are easily available and competition is much less here. As a result, developers on Windows seem to enjoy highest monthly revenue.

However, ultimately it depends upon your knowledge as there are those who make just $1000 in a month. So, think and act wise before actually considering Windows as an option to go for app development.

Developers are often in confusion as to which platform to choose for app development. Earning is one of the factors that help to decide the platform and apart from this; choice also plays an important role.

Hence, consider priority; whether money is important or choice then choose the platform. Earnings you know from this post and rest choice is yours.

Hope you will be able to take a proper decision after referring this blog post. Share your feedback with us at Softqube Technologies, well known Android app development Company.