PHP7 vs. HHVM: Which One Must be Selected?

The new version of PHP is PHP 7. But the question of many PHP developers is how they will get benefitted from this new version. The answer to this question is mentioned in this blog post. So, let’s move ahead and see how developers are benefitted with this latest PHP version.

PHP 7 was released at the end of November 2015 and this version is much more optimized and this helps developers to double their website performance. With the perfect launch of PHP’s latest version; there’s yet another discussion that people are highly involved with. It is regarding the performance of PHP7 vs. HHVM. 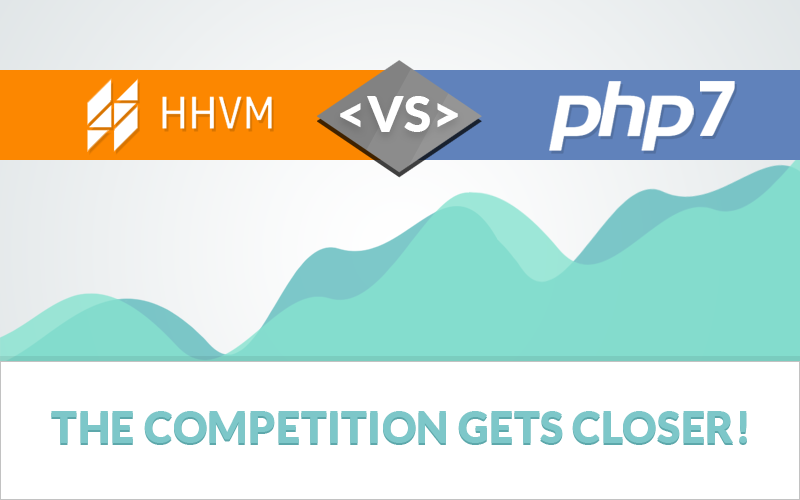 HHVM is considered as a virtual tool for quick web development. Most of the web designers have less knowledge about PHP7. As a result, this leads to a confusion about innovations which are to be included in it.

To move this discussion ahead, let’s take a look at these topics:

HHVM was started by Facebook in 2008. The main aim behind this was to develop a tool that can convert PHP scripts to C++. Once these scripts get transformed into the desired programming language then it becomes very easy to compile them and then finally put for execution.

On the other hand, Facebook users were increasing by leaps and bounds and there arose a need to boost the speed with Facebook account. Constantly working on HHVM has actually made it a perfect tool which has become successful to some extent.

With this Hip Hop Virtual Machine (HHVM); one can make proper use of Just in Time compiler which is used for altering PHP code into bytecode. This machine code makes it easy for HHVM to boost the performance to an extent.

This virtual tool developed by Facebook works at greater speed when it is actually compared to PHP 5.

It is the community’s attempt to support the platform and this version is launched keeping in mind the rise of HHVM. The main aim here is to develop a platform that works 1000 times better than PHP5.

Another question which people have in mind is why there’s need for PHP 7 and not for PHP 6. Why there was sudden release of PHP 7 and not PHP 6 even though preparations for PHP 6 were started earlier but still its launch is delayed.

Finally, the PHP community decided to go ahead with PHP 7 and it was launched in November 2015. Before its release, the discussions about its working were going on.

Both work with same language assistance however the basic difference is in the way they interpret the PHP code. PHP makes use of a free interpreter that helps to execute the code directly. PHP shows the content as desired by the web user with the help of HTML codes.

HHVM works by transforming PHP codes into byte codes. These byte codes are then shifted to machine codes which lead to a faster performance of HHVM. Finally, the execution takes place.

Further those factors which are responsible for performance of PHP codes get removed at the time of rendering codes into machine codes by increasing the performance of HHVM. Both work in the same way when it comes to code writing.

To make proper use of HHVM, it is necessary to get it installed on the server and then conjure it with HHVM command line itself.

PHP7 was rightly made available in Nov 2015 and many developers have checked its performance and they claim that it provides better performance in certain situations as compared to HHVM while there are situations where HHVM works better.

How is HHVM beneficial?

HHVM uses dynamic translation and helps websites run faster in several occasions. It occupies less memory space to begin with the request. HHVM developers go on maximizing the PHP code types so that they can convert it into a machine language that has good speed. Every developer can install, edit and work with this.

How is PHP 7 beneficial?

As compared to HHVM, PHP 7 works faster. This was proved when this new version was tested with Drupal and latest versions of WordPress. Developers of PHP 7 say that they don’t need to install HHVM to boost the application performance.

PHP 7 is long time effort of communities which offer stable help every time. This new PHP version provides increased performance and has less number of bugs.

Is it difficult to make the choice between the two?

The stable version of PHP 7 is now available. It offers an edge for PHP web development. This new version offers outstanding performance. This doesn’t mean that companies will stop using HHVM. Even then, HHVM claims faster development in certain circumstances.

At present, Facebook developers are constantly working on it and now this HHVM support is available for Apple devices as well. Let’s say if you consider working of PHP7 and HHVM then both are in tough competition with each other.

This sometimes leads to the confusion in the minds of people.

In a nutshell, we can say that PHP 7 and HHVM both are good at their place. Now, as per the need; one can use any platform. So, from now on if you have any confusion about the same then take a look at this post and it will make easy for you to choose one.

Hope this was useful to you. For more such details, stay connected with Softqube Technologies, a well known provider of PHP Web Development Services in India.