Apple Smart Keyboard Vs. Logitech Create: Which One is Best Smart Connector Keyboard?

iPad Pro has different accessories as compared to other Apple devices. It has two smart connector accessories that have different keyboard style experiences like as each of the one addressing two various types of tablet users.

However, how we must know which Keyboard is the best; Apple’s Smart Keyboard or Logitech Create. Here, in this blog post; you will come to know about the best smart connector Keyboard. 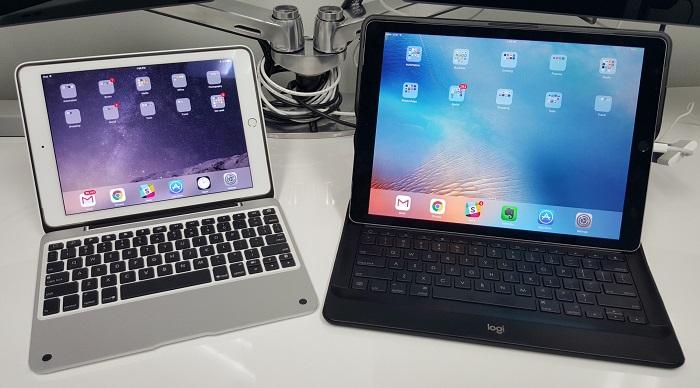 In the competition among the two; let’s see which one is the best; Apple’s Smart Keyboard is easy to move and portable in nature. Hence, it is the most preferable one. However, if you need laptop style configuration and protective rear case then Logitech Create is perfect for you.

The main area of focus is portability. There’s no case to protect the back of iPad Pro which acts as a Smart Cover along with integrated Keyboard. It also has its pros and cons.

The main drawback is it lacks backlight and has less key travels which offers users only one angle. Still, the official Apple Smart Keyboard is most preferable over Logitech Create.

As of now, iPad Pro is not a complete replacement for Mac Book. At times; when you need a keyboard on the go that can be used with Jumbo sized iPad, Apple’s keyboard is great option.

This Apple Smart Keyboard is priced at $169 which is expensive as compared to the option of remaining two. Outside it looks like Apple’s Smart Cover however it has an extra space that is used to accommodate the keyboard that is hidden inside.

This Smart Keyboard has inferior which cleans the smudges and fingerprints off the iPad Display when these are not in use. When these are closed; the iPad Pro screen gets automatically locked.

Further, this smart keyboard easily snaps on and once the case is folded in a triangle, you are done and ready to go. Here, the keys are covered in an easy to use nylon cover which is developed to avoid slippage and then is sealed to protect the iPad against Spills which offers a rebound effect that replaces the need for physical springs.

Even though it is thin, the keys are very soft thus making it easy for users to press the buttons and click on various links. There was a doubt that Apple Smart Keyboard may not provide proper stability when in use.

But when tested, it was quite opposite. It was easy to balance iPad Pro on the lap with Smart Keyboard as it is relatively sturdy, flat base and has secure magnetic connection to the device.

With iPad, it is not necessary to have a keyboard all the time. Hence, it is possible to make Smart Keyboard disconnection easy and it is one of the great selling points. The Smart keyboard can be easily packed and folded while protecting the glass screen on iPad Pro.

This can be removed entirely and its thin design shows that iPad Pro is more portable than a Mac Book. The touch typing accuracy on Smart Keyboard is awesome. This is another area where Logitech’s Keyboard gains points over Apple’s especially with a keyboard home button along with volume and brightness controls.

As compared to Apple Smart Keyboard, it is slightly cheaper. It is priced at $145 and it actually comes with more features that too at a lower price. But there are additional features which add bulk to the Smart Connector accessory thus making it less convenient for occasional use.

This Logitech Create provides a protective case that covers the back of the iPad Pro in which the tablet is to be put when not in use. Inserting and removing the iPad Pro from it is very easy however it is an additional step which makes keyboard less convenient to use as compared to Apple’s alternative.

Now, if you wish to keep a keyboard connected to the iPad every time then you need to have the convenience of an integrated back light, then Logitech is a better option for you.

With this accessory; one can make iPad Pro, a full- fledged laptop replacement instead of an occasional Keyboard that can be used for typing longer documents. The protective exterior is made of Ballistic Nylon.

It is used with a textured woven feel and is akin to folio style keyboards that are available for other iPad models. This keyboard is recessed slightly thus preventing the keys from being pressed against the iPad when the case gets closed.

When it is opened, users simply take the bottom half of the iPad Pro to rest it on Smart Connector where it gets magnetically attached. The two indentations in the front case make it easy for iPad Pro to be angled in two different directions when these are placed on a table.

Talking about the keys, Logitech offers hard plastic keys with thicker design that are preferable more than Apple Keyboard thus offering a true laptop experience. With the designated row of keyboard shortcuts at the top is a huge bonus as this offers quick access to search, control media, home as well as lock buttons.

Which keyboard is perfect will depend on the user case? So, if you wish to get a full time laptop replacement then Logitech Create is a perfect device for you. While those who wish to use Keyboard occasionally for them; Apple Smart Keyboard is the perfect choice.

Hope this blog post will serve as a perfect guide for those who wish to buy iPad Pro or Logitech Create. Loved this post! Stay connected with us for more such guidance and updates about new tech devices.