How to identify a Fake iPhone?

In this huge techno world, you will find people selling fake iPhones but how will you differentiate the fake from the real ones? How can you identify the real iPhone from the duplicate ones and save yourself from fraudsters?

Let’s say you are at a public place and a salesman comes to you requesting you to buy the iPhone and help him earn something as he had not earned a single penny in the entire day. He says he’s in a hurry and wants to sell the iPhone on urgent basis. 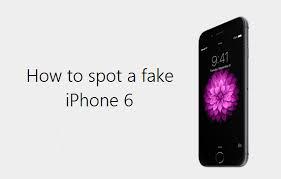 You are baffled, confused and you feel that the iPhone might be a fake one. But is this the right way to judge it? Who knows that may be a real one? Even in huge shopping malls as well as online shopping sites you may be cheated with fake ones.

There’s a complete possibility that you are shown a real one but given fake one however how you can know the difference is the point here?

When asked to Apple about the same; it denies to discuss the issue however accepts that the issue is big and they don’t have numbers for the same. But if we discuss for the evidence then recently nearly 40,000 duplicate iPhones were caught from China.

These duplicate ones are sold easily overseas. People are able to make good living by selling them. When it comes to electronics, unreal iPhones have a huge market along with other fake ones.

Talking about the market share of these counterfeit electronics, these were the second most captured commodities having maximum retail price of up to $145 million and $162 million during 2013- 2014.

Even today, many of the fake iPhones are sold on daily basis. So, no matter whosoever is trying to sell you the iPhones, you must be able to identify whether these are fake or not. From this blog post, you will know the types of Fake iPhones so that you can easily recognize them.

So, next time if you are asked to buy an iPhone that’s available for cheaper rate then make sure to identify whether these are fake or real ones. Yes, sometimes outdated iPhones can be available for cheap but this cannot be the case always.

So, make sure to be alert while purchasing an iPhone and save yourself from being deceived.