Every day we can see lots of updates in Android World. Today, here in this blog post we are going to discuss about Android Studio 2.0 and see how it can be used for mobile app development showing the long standing emulator and develop speed problems.

Recently, Android studio 2.0 was introduced at the Android Developer Summit in Calif. The main aim of android studio 2.0 is to improve developer workflow using improved emulators; a new Instant Run feature as well as GPU Profiler. 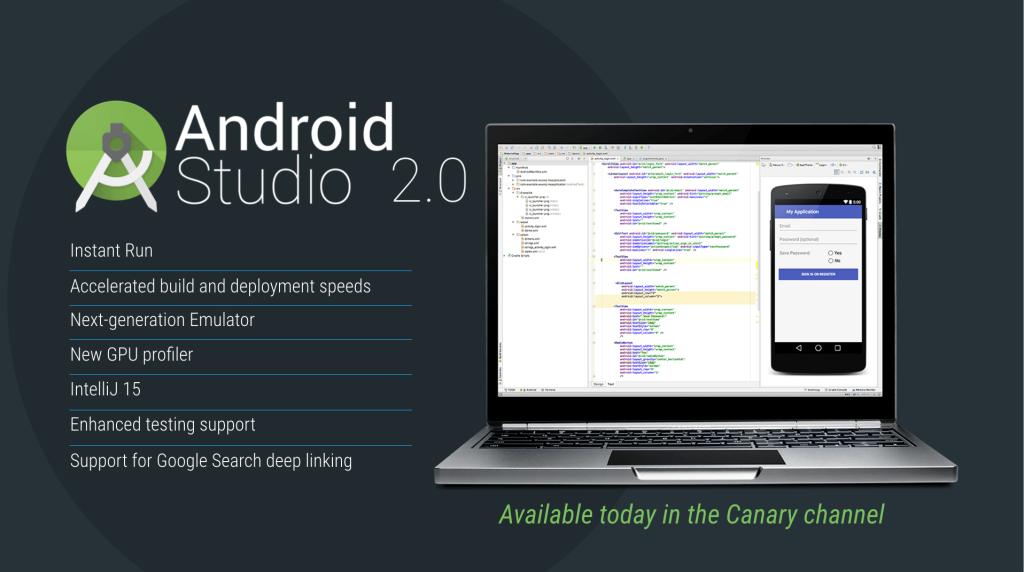 In the Android Studio, the goal is to make IDE a useful tool and to become a delightful tool; it has to be incredibly stable and this is one of the reasons developers spend hours in IDE daily. The recent releases of IDE entirely focus on stability and speed.

One of the users claimed that the speeds were massively increased and this has reduced the slowness issues which confounded many Android developers with the help of Android Studio as well as its predecessors.

In order to iterate, it is necessary to quickly see how the app looks like. Most of the emulators are not as fast as they should be and keeping in mind these issues, Android Studio 2.0 was made in such a way that it adheres to the needs of people.

All the major changes have been made to increase speed and stability. The most important changes were the speed boost and all other improvements included an entirely rewritten UI which allows new functionality like as screen shots, screen rotations, window zooming, drag and drop deployment of an .apk file to the emulator. The edge of these emulators can be resized easily.

All other emulator facilities includes ability to emulate GPS location operations, phone calls, texts, camera usage and lots more to see how apps perform with a full battery and with a drained battery.

The Instant Run feature offers another speed improvement and one of the important features that is needed is to make app development faster in Android Studio. Instant Run allows to quickly see the changes running on your device or emulator.

Certain changes which are not currently supported include adding, removing or changing annotations, instance fields, static fields and method signatures along with many other operations. The Instant Run enables more change types and it will continue to make every editing, development and running cycle faster.

Another useful feature that is highlighted by Android development team is an early preview of new GPU Profiler and debugger. This helps developers working with graphic intensive code. It has now even become easier to profile an Open GL ES Android code with GPU Profiler.

This tool is in early preview however is very powerful and shows all the details about the GL State and Commands. All the sessions can be recorded and walk through GL Framebuffer and Textures as your app is running OPENGL ES Code.

As the Android studio 2.0 preview is in “canary” channel with some of the code changes then Google developers must consider downloading the new release and running it alongside more stable versions of the IDE.

These are some of the bigger updates of in the latest release of Android Studio. In our upcoming blog posts; we will show you how the features of Android 2.0 are useful and how developers can take its advantage.

Developers can try the IDE preview and offer feedback on Google +. Are you interested to use this new Android Studio 2.0 then try it now and let us know how you feel? Are you willing to get more updates about the same? Then stay connected with us.