Microsoft has launched a new lock screen app recently on Google Play named as Picturesque. One more proof of brilliance of Microsoft as a cross-platform company. Picturesque is not the Microsoft`s first Android exclusive app or lock screen mobile app; this credit goes to last year introduced Next Lock Screen.

The work to develop this app began in 2010 in Microsoft`s Garage program as an outlet for some company`s employees to give a good shape to their ideas. It seems that Microsoft Garage employees write Android apps in their free time.

All about this new App

Picturesque app is a cross-platform app that has certain limitations as it profoundly depends on Microsoft`s Bing search engine, as contrasting to Google Search. Picturesque grabs benefits of the big splash images present on Bing`s front page and puts them on your Android phone`s lock screen. This launcher heaves a Bing search bar that can easily be accessed without unlocking your system.

You can scroll up to six images provided by Bing and also get quick access to various settings like Bluetooth, Wi-Fi, volume and brightness. This app can also reveal notifications from your messaging app and phone, and news and weather reports from Microsoft. It also shows your messages and missed calls, and accesses your camera, phone and several device settings. You can also find some India specific aspects like regional calendars. 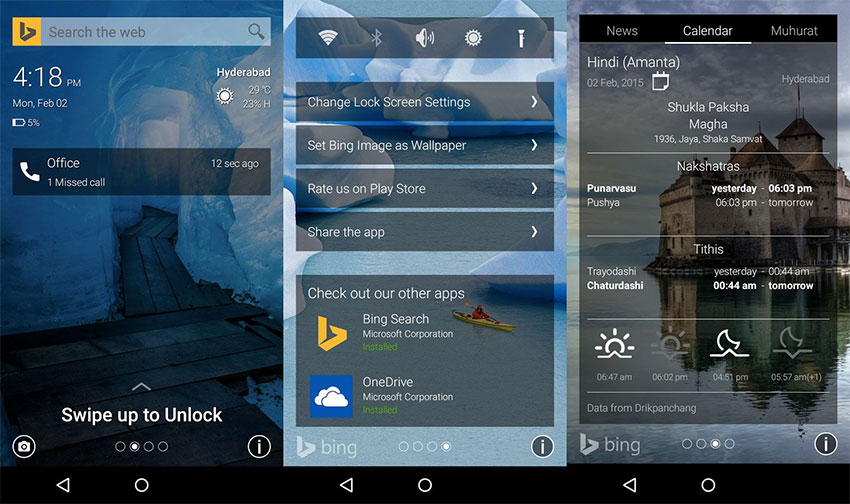 While using Picturesque, a separate launcher app is to be installed. You will find plenty of third-party launcher apps provided by independent developers and several companies like Yahoo, Google and Microsoft Left Behind. If you desire to make your lock screen neat and tidy and need Bing, then you can download Picturesque from Google Play Now on your Android phone or tablet.

It is very incredible to witness that Microsoft is sponsoring company`s employee`s projects, and this newly Picturesque app seems that it will provide the lot of functionality to your Lock screen. If you possess an Android device, then you can hit the Google Play link to try this amazing app yourself.

To know about the reviews and more features of this app, you can view it on Google Play.Enjoy this new mobile app from Microsoft and transform your android device into Microsoft device. Really loved this post? Then stay in touch with Softqube Technologies, Custom Application Development company India and get updated with newer app releases by Microsoft and other IT giants.