Some Tips for Using Hash Tags In Social Media

Everywhere, we see #hashtags in posts available in social media. Every major site makes maximum use of hash tags. LinkedIn is the exception. Now, not only twitter but hash tags can be seen on face book as well as other social media sites.
On some of the social networks, one can find the information by hash tags.

It is important to make effective use of hash tags to get most out of it. Here are some best practices that can be involved to get the best advantage of hash tags. We will take a look at every social site to understand these in a better way.

A snapshot of twitter hash tags is as follows

Hash tags must be used in Camel Case. For example: #InternetMarketingTrends will generate more traffic than #internetmarketingtrends. Hope you can find the difference. Hash tags written in camel case are easier to read. These are not case sensitive so it’s okay to use caps to increase and improve readability. 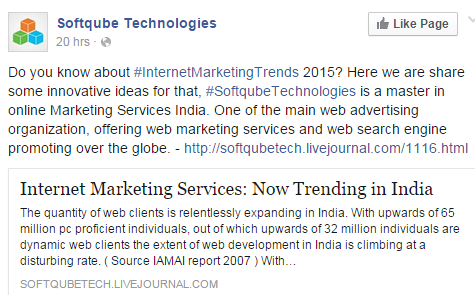 Well, this is not the end. In our next session we will discuss about using hash tags on other social media platforms like Tumblr, Pinterest and more. Till then, stay tunned with posts from Softqube technologies, a well known Internet Marketing solutions provider India.