Developing an app for iPhone is made popular by the tremendous user. Recently, Apple has upgraded the name as an iOS4 in order to compete with Android. iOS and Android Apps developer need to choose any one either app development for the iPhone or for the Android. 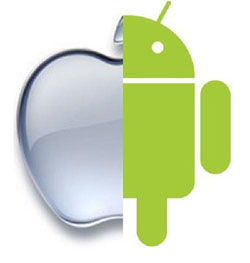 Designing an app need to have some technical skill set were the android app can be designed using the most popular language Java and that of iOS it can be designed using C and C++. Designing in Java is more convenient so, many developer use to opt for android. There is a vast difference between both apps that is an app of iOS can’t be accessed in Android and of Android can’t be done on the iPhone.

There are many toolkits available that helps a developer to develop an app using the guide and not special knowledge of C language. Some of the tool kits are Rhomobile Rhodes, Nitobi PhoneGab and a lot more. Designed app using these toolkits runs smoothly in iPhone, Blackberry, Android as well as Windows phones.
Designing an app for two different things has not got any solution yet and so, it needs to be designed completely in a new manner or by rewriting according the requirement.

Android app development is chosen by most of the developers as it helps to make challenging features in the game. Android app also helps to make an awareness of location via GPS, setting alarm, notification features, and popup messages. The Android app can be developed using a touch and keyboard facility, according to the configuration of hardware. Recently it is found that an incoming messages and phone calls createsa problem in using apps, but such problems are not found in an iPhone. The reason is that the iPhone app developers are well spectrum of devices to target, with a well-defined scope of capabilities and limitations.

Speed is a prime factor for an app so, Apple gathers information for iPhone app developers in different forms, including multimedia where concepts are made clear by videos. Whereas, in Android the app has an open source facility which gives an idea of architecture and API usage. Testing is an important part for the developers so a green signal says that an Android app is successful.

No Java or Flash allowed?

Apple does not support the technology of Java and tried to change, but there was no possibility found. It is said that it is an era where scams are done in large extend so for security reasons and rich platform, where a high quality output is required for audio, video, animations and many more are major components of an app.

With the feature of making payment and asking for approval again and again limits the users of iPhone and on the other hand the users of android and windows phone have comparatively got popular because of easy and user friendly feature.

Select the perfect operating system that suits your needs and get your mobile apps developed on the best suited platform from the reputed Mobile App Development company Softqube Technologies, India.