Samsung would Launch Foldable Phones In 2017

Is your phone big for your pocket? Don’t worry, if it is. You may now fold it. You may prefer a robust screen size of the phone that may never slip from your pocket. According to the reports, Samsung would soon launch a smartphone with folding display in 2017. The phone’s size would be 5 inches and have the 8-inch folding screen. Bloomberg suggests that phone may get launched early next year at Mobile World Congress in Barcelona, Spain. The device uses organic LED technology for the display. Samsung in CES 2013 showed the concept.

Publics have high expectation from their phones like battery life, processing power, and image capability. There is a massive market for working and bendable phone. If you have an unreliable black and white low-resolution screen, it is not a commercial prospect, as revealed by a researcher, Arvind Vijayaraghava, at the Manchester University. Samsung is operating the project under the codename – Project Valley.

According to the source, the company is planning to launch two devices eventually. These models are not likely to be flagships. It would just gauge the interest in phones with foldable screens in the market. However, it is not clear if both the devices will be launched at MWC next year. We have been hearing about the technology for quite some time now, and Samsung is not the only company experiment with the foldable screen tech. LG, Sony, and sharp are also working on it. 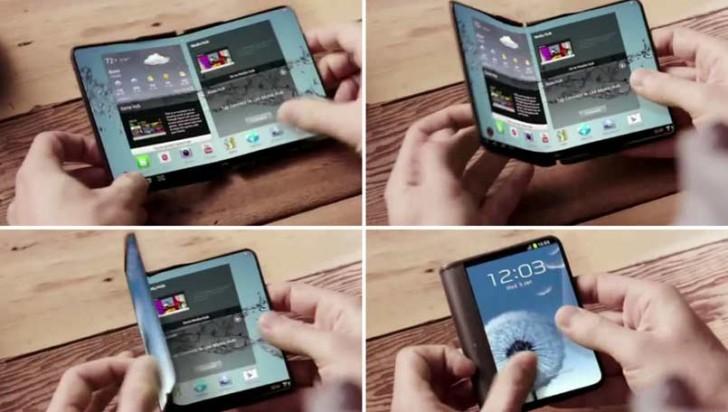 An executive at Samsung revealed to Bloomberg that the display could be folded into half like a cosmetic compact. The mobile maker, Oppo had earlier shown a bendable phone in May this year. Some attributes of a good phone are improving incrementally over the past few years. Another Chinese company named Moxi had also explained the working model of the bendable Smartphone with the black and white display.

The analysts predict that one of the Samsung phones would look like a bracelet that has been flattened to function like a phone. You may be reminded of the concept that was possessed by Nokia, specifically Nokia 888. The idea of bending and folding your screen may seem to be ultra futuristic, and it would change the mobile device market. By reducing the overall size of the device, the manufacturers may have to compromise on its specifications. This device is expected to appeal a particular audience. The technology helps in development and adoption of modular phones if it takes off.