INDIA ON EVE OF ITS 70th INDEPENDENCE ANNIVERSARY

India triumphs its independence from the British Swaraj after 200 years of bondage or enslavement and on the midnight of the 14th of August 1947 Prime Minister Pt. Jawaharlal Nehru delivers the first Independence Day speech announcing the birth of the new nation. Since then we have been savoring our freedom and we proudly celebrate our celebrate our Independence Day on 15th August of every year.

The freedom we relish today is a result of the sacrifices made by some of our great leaders and freedom fighters like Mahatma Gandhi, Sardar Vallabhbhai Patel, Lal Bahadur Shastri, Subhas Chandra Bose, Bhagat Singh, Chandra Shekhar Azad, Rani Lakshmi Bai and many more who shed their life for the freedom of their motherland.

Independence Day is declared as a National Holiday in the Country. It is celebrated all over India with great pride, all institutions, schools, colleges, and corporates have a flag hosting ceremony followed by the National Anthem. Most schools, colleges and institutions have a march parade and cultural activities performed by the students. TV channels show patriotic movies and the radio plays patriotic songs evocating the memories of freedom fighters. With the growing time and technology people share patriotic messages, slogans, pictures, images and tweet showing their love and passion for their motherland. 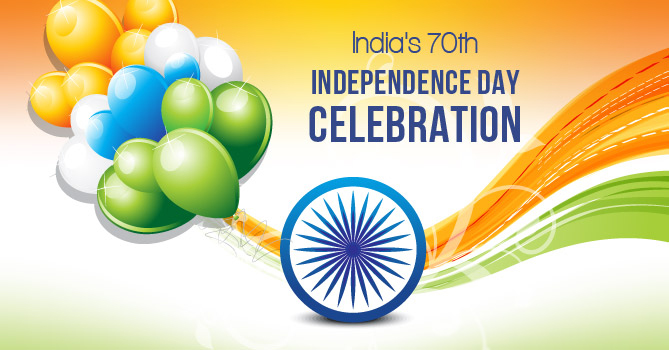 INDIA AND ITS UNIQUENESS

Our strength is our simplicity. A Hindu nation with a Democratic Government and strong constitutional values where a catholic woman by origin steps aside for a Sikh person to be sworn in as a Prime Minister by a Muslim President where 80% of the population is Hindu. The English language, which is not our mother tongue, is most widely and affluently spoken in India. We have 5,600 newspapers, 35,000 magazines published in over 21 languages for a population of 125 crores. We are the third largest nation in the world of doctors, engineers and scientist. We possess the third largest army in the world.

We have reached the moon and back but we are still considered to be the land of snake charmers. Though not for long, thanks to the dynamic leadership of Mr. Narendra Modi.

On the eve of 15th August the president addresses the nation with his motivational and inspiring speech from his office which broadcasts live on radio and TV. Every year on the 15th of August the Prime Minister addresses the Nation from the rampant of Red Fort rendering his speech to the fellow citizens with an aim to exhort them to unity and Nation Building. The speech will be followed by the usual ceremonial procedure of 21 Gun salute followed by cultural programs from schools. He also pays tribute to all martyrs in India’s struggle to freedom.

On Monday the 15th August, 2016 Prime Minister Narendra Modi will address 125 crores Indians on the 70th Independence Day from the Red Fort with his motivational and evocating speech, assimilating the achievements of the past and elucidating the way forward. PM Narendra Modi had delivered his maiden speech on 15 August 2014, where he managed to enthrall people of all ages and different sections of society and invoke them with a feeling of patriotism. The atmosphere across the country was electric and the nation felt a wave of devotional love for their motherland, with hope and optimism for the future. Mr. Modi defines the democracy of India as its constitutional strength and potential, which made it possible for a boy from a small town and poor family to be elected to pay his homage to the National Flag and steer the reins of their country to national unity, world peace and a strong economy. He says we celebrated this day by taking a solemn pledge of working for the welfare of our motherland, and also for the prosperity of the poor, suppressed, dalits, the exploited and the backward people of our country.

He states there is no space for castism or communalism in our thoughts, our simplicity is our strength. We have to empower the poor, increase agriculture productivity, dignity of labor to be our national duty, sharpen and guide the youth and its potential to the growth and development of the country. Introducing the ‘Swachh Bharat Abhiyan’ and ‘Start Up India’ and ‘Stand Up India’, the government has initiated various welfare schemes to strengthen the poor and educate the women in India. PM Modi has made a lot of foreign visits to strengthen relation between countries, investment tie up, peace talk and foreign trade.

We eagerly look forward to the 70th Independence day speech by Prime Minister Narendra Modi elaborating and elucidating the achievements of the past by his government and the united way forward to a better, healthy and strong India.

The staff and management of Softqube Technologies would like to wish all their staff, channel partners and clients a very happy 70th Independence Day. With Mr. Modi announcing the plans forward for the next few decades, Softqube Technologies also looking to reach those same heights that Mr. Modi has envisioned.